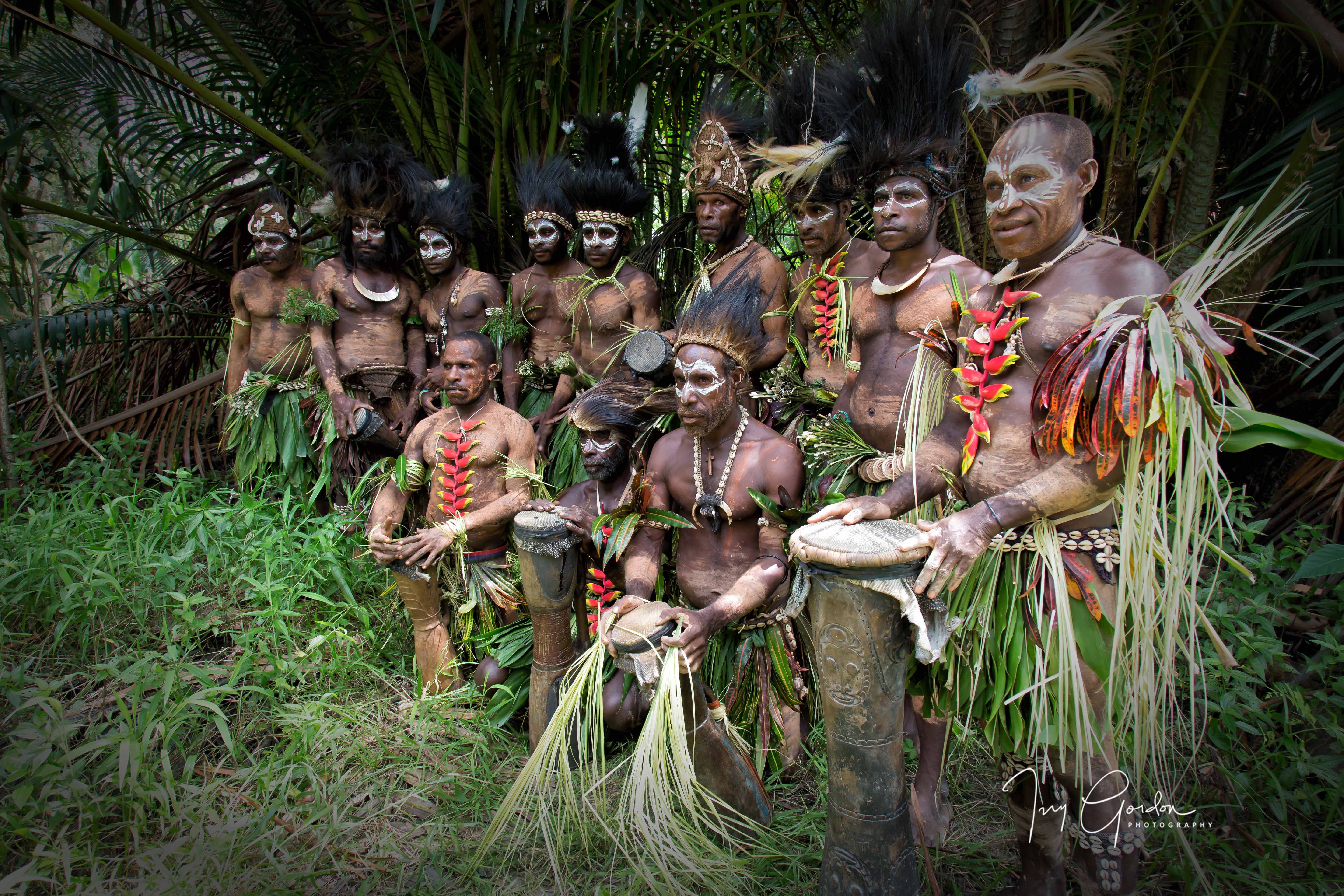 About a decade ago I read an account of a young woman who traveled alone up the Sepik river in Papua New Guinea, the eastern half of the world’s second largest island. I was so taken with her story I decided to go there one day. I had the pleasure of joining a photo tour in August 2017 to explore not only the Sepik, but the Highlands at Mt. Hagen, the wetlands, and the coastal area in Milne Bay with it’s pristine coral reefs. I am delighted that we visited these three distinct regions – even though no roads, bridges, or land based infrastructure connects them (which made for much adventure, delay, and fortitude!)

After flying to the town of Wewack, we rode by bus for four hours to Pagwi and then boarded motorized, long, dugout canoes sitting on cushions on the bottom for a two hour boat ride to the village of Kanganamun on the Sepik River. The Sepik is the longest river in the country producing a tropical rainforest climate. People live in remote villages along the banks where until very recently their lifestyle has changed little for thousands of years.

We were to be living in the village for two days. After arriving, we walked to the guest house – 3 rooms on a second floor of a building on stilts. Women in one room, men in another, sleeping on mattresses on the floor placed side-by-side under individual mosquito nets. The shower was a rain-barrel with a bucket and the toilet was an out-house. (Lots of Deet, sunscreen, and sweat for two days!) After settling in we walked through the village to the Spirit House.

The Sepik people have unique customs and traditions, building large and elaborate spirit houses to house the good spirits. Women are not allowed in the spirit houses but that doesn’t apply to tourists. In the spirit houses we found very old artifacts along with intricate, gorgeous modern carvings made to ward off evil. The spirit house is where important village decisions are made and where boys are initiated in ceremonies involving painful scarification which resemble the river crocodiles representing strength and power. Head hunting was also a cultural practice—young men could only come of age in these regions by taking a head!

Carving on front of Spirit House

Village man with his elaborate carving depicting an origin story involving the crocodiles and the eagle. It is for sale

People of the village are aware that tourists offer a way to improve their lives and they are anxious to make us feel welcomed. We know that tourism is a double-edged sword and hope that these people can maintain the best of their traditions as they gradually increase their infra-structure, health-care, and safety. Everywhere we walked, people said good-morning or hello. When I thanked them for allowing me to stay several people responded with – “my village is now your village too”.

The next day about fifteen groups arrived by dugout canoe for the sing-sing – a peaceful gathering where they demonstrate their distinct culture, dance and music. Each group proceeded to assemble their costumes by harvesting leaves and feathers from the forest. They sewed flowers together, painted each others’ faces and graciously allowed us to photograph them. Most of my photographs below are from the group at Balum Bay, which is the mother village to the 1st generation village of Kanganamun where we were staying.

Sewing flowers into a head dress

An example of Christianity existing alongside traditional practices

Mirrors were not often used

After about three hours of preparation the dancing, singing and drumming began. It was hot, probably in the 90s with 90 % humidity, yet the performing continued for hours, with each group outdoing the others. I missed the speeches but again we were greeted and told how glad the people were that we came so far to meet them.

The Masks dancing in front of the large Spirit House

Children with the Cassowary Bird - the symbol of the village

This journey would not have been complete without a reminder that we were indeed in an area at the beginning of infrastructure. On the way back to Pagwi one of the two canoes didn’t show up. Seems their engine died. Eventually they found someone in a village who loaned them an outboard motor. They arrived and we were on our way!

I am grateful to have gone on this trip and seen this country when I did.  I am very interested in when the natural world, cultural legacy, and ancient traditions collide with the various forces of modernity.  And I am pleased to continue to experience that despite our different cultures, people are more alike than different.

Papua New Guinea is one of the world’s least explored, culturally, and geographically diverse countries in the world, having more than a thousand indigenous ethnic groups speaking over 850 different languages. Most of the 7 million people live in traditional rural communities with less then 20% living in urban towns or cities. Two-thirds of the population lives below the poverty line. Villages are based around farming and there are strong traditional animism religious practices combined with modern organized religions.

Papua New Guinea has a reputation for being a violent place. Cannibalism by one tribe has been reported as late as 2012. Tribal friction is not necessarily seen by tourists but is not far below the surface. We were accompanied by security except when we were in rural villages. It is one of the most dangerous countries in the world to be a woman. The country is often ranked as the worst in the world for violence against women, where 41% of men reported raping a non-partner and over 2/3 of the women have experienced domestic violence.

This entry was posted in Papua New Guinea, Photography, Travel.